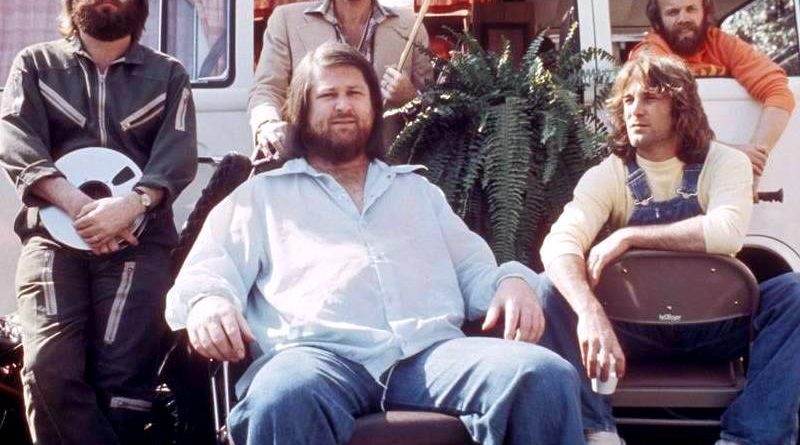 It was 46 years ago tonight (August 5th, 1976) that the Beach Boys’ NBC prime time special The Beach Boys: It’s O.K. premiered. The show, which was produced by Saturday Night Live’s executive producer Lorne Michaels, was based around the group’s 15th anniversary, their new 15 Big Ones album, and the full time return of Brian Wilson to the group, kicking off the legendary “Brian’s Back” publicity campaign.

The special included live performances filmed on July 3rd, 1976 at California’s Anaheim Stadium in front of 55,000 fans, featuring the group’s classic lineup, Mike Love, Dennis Wilson, Carl Wilson, and Al Jardine, with the long reclusive Brian behind the keyboards, playing only his second full concert in over six years.

The show’s sketch in which Saturday Night Live’s John Belushi and Dan Aykroyd pose as California Highway Patrolmen and force an overweight Brian out of bed to go surfing after issuing him a citation for failing to surf, has gone on to be one of rock n’ roll’s greatest comedic moments. Later that year, photographer Annie Leibovitz used a photo of the bathrobed Brian holding a surfboard for an iconic cover of Rolling Stone.

Although history has since revealed that the 1976 “Brian Is Back” publicity campaign was hardly as organic and well intentioned as it seemed at the time, Mike Love told us he still has a soft spot for that year’s Top 10 “comeback” album 15 Big Ones: [“Well, ‘It’s O.K.,’ and ‘Rock And Roll Music’ are both (laughs) on that one. Yeah, I really thought ‘It’s O.K.’ was underrated. It’s a really cool song. It’s an early-summer kind of song. And ‘Rock And Roll Music’ went to Number Five and we do that in our show for sure.”] SOUNDCDUE (:15 OC: . . . show for sure)

Beach Boys author, historian and documentary producer Jon Stebbins, who wrote the definitive biographies on Dennis Wilson — The Real Beach Boy — and David Marks — The Lost Beach Boy, explains that Mike Love’s importance to the band’s live shows should never be underestimated: [“Mike’s confidence standing onstage as a frontman is one of the really crucial things that he brought to the table, that without him, they woulda been screwed, man! They just did not have a personality in the band that could do what he did. And he did it well right from the start, and he got better and better and better at it. Until the point where then it became uncool to be that way. And it’s sort of like he couldn’t turn it off. Y’know, he was what he was.”] SOUNDCUE (:25 OC: . . . what he was)

Peter Ames Carlin, the author Catch A Wave: The Rise, Fall and Redemption Of The Beach Boys’ Brian Wilson, says that no mater how far Brian tried to distance himself from the group, he always ended up returning: [“Brian allowed himself to get dragged back into the Beach Boys, time after time, after time. If he didn’t want do it, he wouldn’t have done it, really. It’s not necessarily the healthy decision, but I think it was the one that worked for him.”] SOUNDCUE (:14 OC: . . . worked for him)

Carlin went on to say, that when Wilson rejoined the Beach Boys as a touring member and producer, it was an uneasy reunion at best: [“They never wanted him back in the band, and they understood his importance as a commercial attraction. And if he was going to be there, having him kind of shunted off to the side, just sitting there like a trained bear was pretty much what they could handle. When there were times that he began to kind of assert himself again, y’know, there was no way they were going to accept that.”] SOUNDCUE (:17 OC: . . . to accept that)

Highlights in the special include Dennis Wilson acting as one of the judges of the Miss California beauty pageant, Dennis singing his signature “You Are So Beautiful” encore at the Anaheim show, and all three Wilson brothers harmonizing around the piano singing group chestnuts such as “I’m Bugged At My Old Man” and “Surfer Girl.”

The title of the show was chosen to tie-in with the band’s then-current single, “It’s O.K.” It was the follow up to their recent Top Five hit, a cover of Chuck Berry’s “Rock And Roll Music,” which earned the group their first Top Ten hit in nearly a decade.

The footage from the It’s O.K. special has gone on to be featured in nearly every Beach Boys documentary since its network premiere.

The special was recently re-released on DVD by Eagle Rock as The Beach Boys: Good Vibrations Tour.