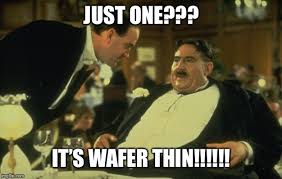 With Thanksgiving being the “rabbit hole” of eating, more than half of people say they’re “writing off the end of the year” when it comes to making healthy food choices. According to a new survey . . .

45% of people say they’ve eaten so much during the holidays, they had to unbutton their pants.

30% have eaten until they felt sick

43% have eaten more than one dessert at a meal.

12% will hide holiday foods to “save them for later.”

And 25% have eaten an extra-large midnight snack