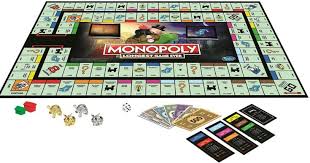 Hasbro just released a new, LONGER version of Monopoly. There are two or three versions of every property, you only use one die instead of two so you move around slower, and the game doesn’t end until someone owns every single property. It costs $20 and it’s only available on Amazon . . . where they’ve already sold out of their first batch. To be fair though, Hasbro also released a second version of Monopoly that’s the opposite. It’s called Monopoly Speed, and they promise it’ll take less than 10 minutes to finish. Here’s a picture of the long version game board.