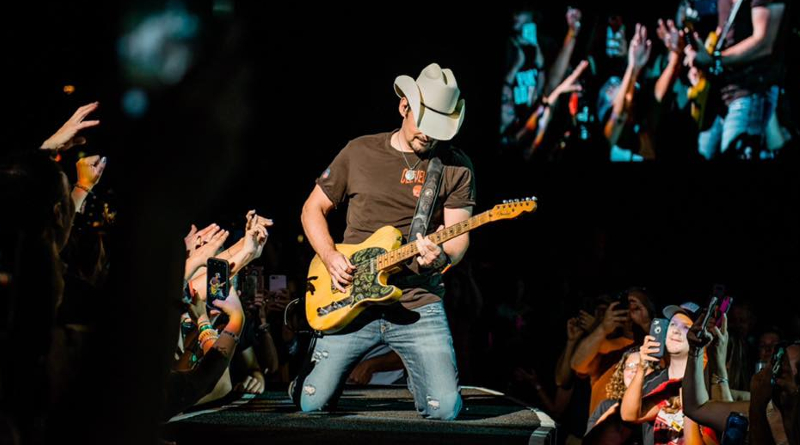 Country music superstar Brad Paisley will be the headline performer at the 2020 Allen County Fair in Lima.

Details are in the following media release from the Allen County Fair.

Fair General Manager Bob Fricke said, “The Allen County Fair has had tremendous success in bringing in top-notch country music acts and we have hit another home run in signing Brad Paisley for 2020 fair. The Fair’s Board of Directors looks forward to bringing Brad to the music fans of our area.”

A proud Grand Ole Opry member since 2001, Brad has written 21 of his 24 #1 hits and sold more than 20 million albums, track downloads and streaming equivalents in his career! During the European portion of his recently completed 2019 World Tour, he sold out all eight shows and now holds the record for a headlining country artist in all the European venues played on that tour. Paisley is also often seen on TV alongside Peyton Manning in a very successful, ongoing series of commercial spots for Nationwide Insurance.

Paisley and his wife, Kimberly Williams-Paisley, co-founded The Store, a nonprofit, free-referral based grocery store, which aims to empower low income individuals and families in the Nashville area (go to www.thestore.org for more information).

Tickets for the Brad Paisley concert will go on sale Tuesday, December 10 starting at 9:00am at www.allencofair.com or at the Fair box office. Pricing $100 VIP Pit, $70 Party Pit, $60 track seating, $45 for grandstand and bleachers. Prices include service charges but do not include a general admission ticket to the Fair, which is required. VISA and MasterCard are accepted. A seating chart and additional information can also be found on the Fairs website at www.allencofair.com.