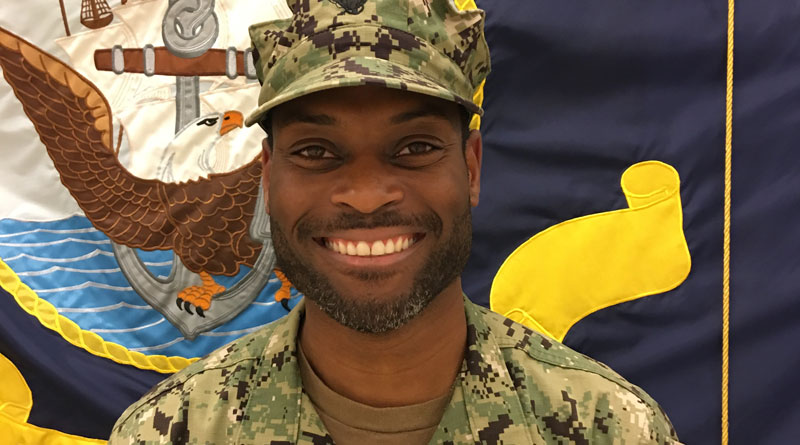 MILLINGTON, Tenn. As Americans reflect on the service of military men and women this Veterans Day, some may not realize that they are fellow residents with those who serve in the U.S. Navy Reserve.

Petty Officer 1st Class Daniel Leaks, a resident of Findlay, Ohio, supports and defends freedom around the world, as a Navy operations specialist, who is responsible for plotting ship’s position, heading, and speed.

Leaks is a 2002 Mackenzie High School graduate and native of Detroit. Leaks also earned a degree from University of Findlay in 2014 majoring in graphic design.

Reservists seamlessly support and actively aid military missions while continuing to lead their own independent lives in the civilian world, according to Navy officials.

The Navy Reserve is a 100K strong team of sailors embedded across the fabric of society, loyal and dedicated patriots, serving both in uniform and civilian jobs, ready to defend the homeland and deploy across the world in a moment’s notice, said Vice Adm. Luke McCollum, Chief of Navy Reserve.

The Navy Reserve provides strategic depth to Americas Navy as it protects the American homeland and advances economic prosperity by preserving freedom of the seas.

Marathon Petroleum Corporation’s outstanding culture has allowed me to serve my country worry-free from an employment standpoint, said Leaks. “I also contribute being able to balance civilian and Navy to my wife, whom is a prior service member.”

As a Navy reservist, Leaks serves with Navy Operational Support Center Toledo responsible for serving as the operational support unit’s career counselor. The commands mission is to support the Navy and Marine Corps team in the training and administration of the Navy Reserves with mission ready units, equipment, and individuals throughout the full range of operations from peace to war.

Leaks is playing an important part in Americas focus on rebuilding military readiness, strengthening alliances and reforming business practices in support of the National Defense Strategy.

Our priorities center on people, capabilities and processes, and will be achieved by our focus on speed, value, results and partnerships, said Secretary of the Navy Richard V. Spencer. Readiness, lethality and modernization are the requirements driving these priorities.

Though there are many ways for sailors to earn distinction in their command, community and career, Leaks is most proud of being certified as a Plane Captain for F/A 18 Super Hornet Jets, qualified career counselor and earning three Navy and Marine Corps Achievement Medals.

I am very proud to achieve becoming a certified Plane Captain,” said Leaks. “Obtaining this certification required a full year of studying, patience and learning.

Serving in the Navy is a continuing tradition of military service for Leaks, who has military ties with family members who have previously served. Leaks is honored to carry on that family tradition.

As a member of one of the U.S. Navys most relied upon assets, Leaks and other sailors know they are part of a legacy that will last beyond their lifetimes providing the Navy the nation needs.

Serving in the Navy allows me to defend my country and there is no greater feeling, added Leaks. “The military has also allowed me to travel the world, become a professional and become a better role model for my community and my family.”