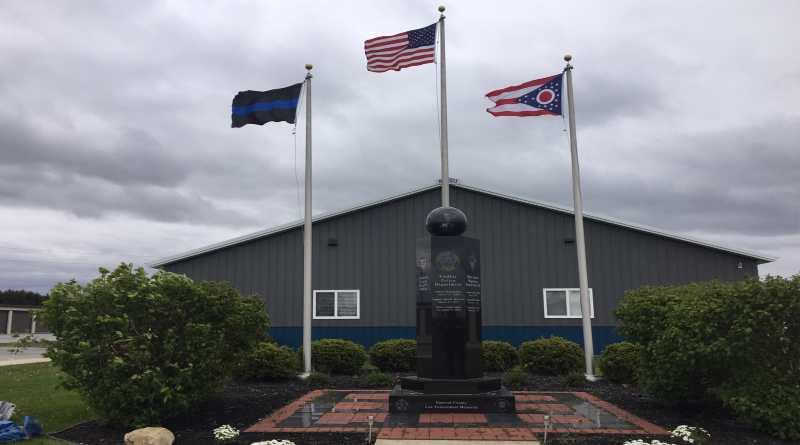 Although there couldn’t be a formal ceremony because of the pandemic, people were encouraged to remember and honor the fallen heroes of law enforcement during Police Week.

Police Week runs May 10th through the 15th with Friday, May 15th being Peace Officers Memorial Day.

Hancock County Sheriff Michael Heldman says although they cannot gather for a memorial ceremony, they will continue their tradition of honoring the fallen heroes of law enforcement who sacrificed their lives in the line of duty.

“We ask that you keep all law enforcement personnel in your thoughts and prayers as we remember those we have lost and those who still serve.”

We spoke with the sheriff as he was placing a wooden flag he made in front of the courthouse.

On the flag it reads “blessed are the peacemakers” and it will be lit up with a blue light at night.

The Findlay Police Department is also encouraging people to take part in the Light Ohio Blue campaign, in which you light an exterior light blue to show support for law enforcement and to honor the fallen

In 1962, President John F. Kennedy signed a proclamation designating May 15th as Peace Officers Memorial Day and the week in which that date falls as Police Week.

Below is video of the Hancock County Law Enforcement Memorial at the F.O.P. Lodge on Romick Parkway in Findlay.

On this Peace Officers Memorial Day, while we can't gather at the U.S. Capitol, Americans will still pause to honor Officers who lost their lives in the line of duty in the past year. We will never forget those who fell on the Thin Blue Line, & their families are in our prayers. pic.twitter.com/XLGtzJbp2H